About six months ago, I decided to drop everything and travel. I was disheartened with the work that I had pieced together as a flutist and started to think that maybe classical music had never been a passion of mine after all. I realized I had stopped listening to classical music unless I was studying an excerpt, and that practicing flute usually only resulted in wrist pain and cold sores.

I have always loved to travel and, besides music, I have always been passionate about learning Spanish. So I said difficult goodbyes to my students, packed a backpack with four outfits and a hammock and hopped on a one-way flight to Guatemala. My primary goal learning Spanish, I opted to go it alone, and sure enough made an excess of friends along the way that have helped me to have a very authentic experience. The only problem was, I decided not to bring my flute.

At first, it wasn’t an issue. I enjoyed a couple months of adventuring and talking with new friends about anything but classical music. I noticed that neither Guatemala nor El Salvador have very many band programs in schools and many people do not even know what a transverse flute is (they think I play recorder). I decided to embrace the cumbia all around me and consume music like the locals do. 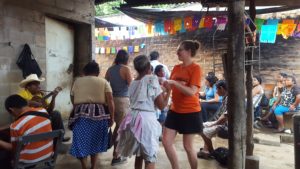 On my 4th day in Guatemala, I woke up at 5am to the sound of a trumpet player and about 5 people singing mariachi music. I thought it was a group of guys returning from the bar and enjoying a song, but it went on for about an hour. A complete mariachi was performing about 3 houses down including multiple guitars, strings, singers and the infamous trumpeter which was significantly louder than everyone else. I could even see someone conducting from my window as the sun started to rise! Later, my friends informed me it is a tradition to send a mariachi to your house to wake you up at dawn on your birthday.

Other musical experiences included: town fairs and convites in Guatemala which include up to about 50 people dressed up in huge costumes and masks dancing a synchronized choreography, traditional Guatemalan marimba ensembles in which 6-8 people play identical melodies on 2 separate marimbas, ranchero singing duos organizing karaoke at parties or in the town squares and also pickup trucks loaded with a drum set, keyboards, guitars and huge speakers that drive along saint’s day processions, town fairs or even funerals. 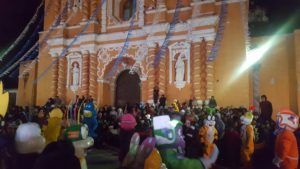 After my 3rd month, I started to miss making music. I found myself searching for keyboards or guitars at my friends houses and playing along to YouTube tutorials of pop songs. I decided to reach out to a flute instructor in Guatemala City who happened to have an intermediate level Yamaha flute with open holes and a B-foot. As this purchase did not fit into my $5 per day budget, I also considered buying a cheap student model flute, but at the end of the day I knew I would regret not having open holes and not being able to play “Zoom Tube” for my new friends.

Armed with my new flute, I was eager to perform for all of my new friends. I felt I was able to genuinely be myself and properly express my gratitude to all of the Guatemalans who had invited me into their homes or who lent me a helping hand. I played “Zoom Tube” 6 times within the first week, and it was awesome!

Although I have always loved to improvise, it was hard at first to branch out from my usual repertoire of orchestral excerpts when playing for people. However, sitting at a bus stop or chilling in my campsite I began to take over playing flute for myself again. I began to pick melodies of pop tunes or old songs that were stuck in my head just play them with no shame. After a few verses I would take off with an improvisation, always feeling the music underneath. I started to reconnect with the flute for the beautiful tone and connection to my breath, and not the complex classical repertoire that for me was always a super fun challenge.

I slowly stopped fearing that I would play something boring or “wrong” and started carrying my flute around with me everywhere. People have a wide range of reactions to a flute, especially if they have never seen one before. Sometimes it was hard to get people to stop talking for long enough to play more than 2 songs, and a few other times they even requested Mozart or Bach! But each time, I felt I had contributed a moment of clarity and peace, that connected us all even though we come from different backgrounds and speak different languages. The emotions that I felt, far from my home yet surrounded by support and appreciation, I freely transmitted through my music.

I know that my audiences were moved by my playing, as people would happily tell me about the various comments their video of me received on Facebook, or as the sounds of my Bizet Entr’acte from Carmen escape from different rooms of the house the next day, and especially when the abuelas would grip my arm and thank me with teary eyes. Now, I feel silly having weighed the cost of this instrument because I am reconnecting with the passion of the first 27 years of my life in a more organic way, with total artistic freedom.

I continue along my wild journey, embracing the musical opportunities that speak to me in the moment. About three weeks after traveling with my flute, I went to a bar with my friends in Ahuachapán, El Salvador, where there was a salsa cover band playing. When they stepped off the stage to take a break I was quick to let the lead singer know I was armed with a flute in my backpack. Later on in the evening they started playing their last few songs, and the next thing I knew they were inviting a “special foreign friend” to the stage. Luckily their last two songs were popular hits, and they really let me free on “Oye Come Va.” Although the months without practice and my difficulties with the new inline G were apparent to me, my fellow musicians, friends and audience of about 60 rowdy people in a bar were blown away. Not only did I walk away with a great story, but I finally felt proud about playing flute again. 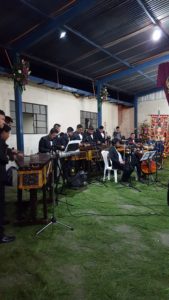 I feel at peace with my passion for the flute now. I recognize that I will always be a flutist and the flute will always bring me joy, as long as I stay true to the music within me. For years I tried to make myself into a successful classical musician, but with a more organic and positive approach to the instrument I understand that musical success is better defined through communication of emotions and not the amount written on a paycheck.

To all of the young flutists considering a career in music: always listen to your heart and stay true to your musical tastes. You can make a career out of any type of music, it doesn’t have to be with a band or orchestra, BUT you have to be deeply passionate about it, and you have to be a creative entrepreneur. You should be realistic about your own talents and take advantage of them. Don’t forget to develop other skills as well like marketing, writing, digital recording and editing, web design and especially business skills because they are 100% necessary. Most importantly, seek out friendly work environments and arm yourself with a mantra or method to tune out the competition.

To every flutist: always reserve time in your daily practice routine to play something that lights up your heart, or even better, play it for/with other people. If that is hard to do, than take a break (it took me months!). Remember that music is much more than just learning to interpret scores, and you have to have an emotional connection to the music to make it successful. 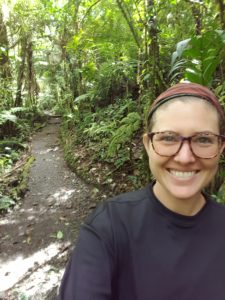 3 comments on “I Went on a Trip and Didn’t Bring My Flute, by Ellye Walsh”