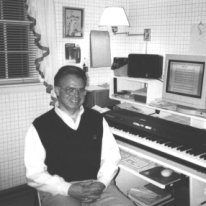 Allie Bruce has been reading music since she was about 4 and picked up flute at 10 years old. She started playing handbells around the same time and met RAFA member Twila Kelly. Kelly became a mentor to Allie when she played in Kelly’s flute choir. She currently plays in RAFA’s Silver Fantasy Flute Choir, works as the GM of Zaxby’s in Cary, and takes classes at Wake Tech. Allie has a three year old who loves music and the piano.

Interesting Ricky fact:
Ricky started out his musical career playing the accordion like his father, who was a professional accordionist, his entire life.

Accordion has always seemed so complicated and fascinating to me. So, naturally I asked a few questions, the first being if he liked it, to which I got a very enthusiastic, “Yes!” I asked if it was difficult, and he told me, “A lot of people think it is hard, and I guess it is…” and then he describes a piano accordion for me and what could make it difficult, then continues “you get used to it, just like anything else.”
“Practice makes perfect?”
“Yes, practice makes perfect. There is really no shortcut is there.”
I asked him about practicing the accordion. He replied, “well I was more serious about the accordion for a long time, but yes, I used to practice probably three hours a day at one point. And I thought I was going to go to college as an accordion major. Since that wasn’t possible, I decided to be a flute major. I got actually more serious about the flute the older I got.”
We did talk about his flute beginnings as well, “When I was in seventh grade, I wanted to play in the band. I went to the band director, and asked him ‘What instrument didn’t anyone else choose to play?’ He said the flute, and I said ‘That’s the one I’ll play.’ I knew if I played an instrument no one else chose I’d have a real good chance of getting into the band.”

Interesting Ricky fact:
‘Reflections’ is the very first piece Ricky wrote for flute choir in 1984. Ricky also told me he hadn’t ever heard ‘Reflections’ until early 2018 on a YouTube video.

“I just sat down at the piano one day and started making up things. I said ‘you know what, this will sound good with flutes.’ Then I started voicing it for a flute choir.”

Interesting Ricky fact:
All of Ricky’s early arrangements were published before he’d ever heard them.

Ricky explained his expandable arrangements and how they came to work for his flute works. He was writing arrangements for a touring big band singer. It was important that the vocalist always sounded good, regardless of how many of the eighteen musicians were available for the performance. These big band arrangements were expandable and had to work successfully using a minimum of three horns and a rhythm section. As the instruments became available, the arrangement expanded to its full potential. Similarly in his flute compositions, this technique gives the flute choir flexibility since only a quartet is needed for the composition/arrangement to be performed successfully. As the other instruments become available, the work expands harmonically. It then supports, reinforces other instruments, or introduces additional countermelodies. The piece can always be used successfully and musically under unforeseen situations as long as you have the top four parts covered.

Interesting Ricky fact:
Ricky Lombardo is not Ricky’s legal name. It is his stage/musical name. He was born as Harry Richard Lombardozzi. In fact, when people write him checks made out to his stage name, the banks don’t want to accept them.

We talked about how he knows what to write, whether it’s an original or an arrangement. The issue of writing an arrangement is if a license can be obtained when protected by copyright. “If a particular piece of music appeals to me, then it may become an arrangement. However, my originals have started by playing the piano, and I say to myself, ‘That sounds pretty good. I like that,’ and start writing the composition.” ‘Clowns a Comin’ was written after a long, depressing night of playing with his flute ensemble and not being able to find new music they liked. So, Ricky wrote them something for fun.

Interesting Ricky fact:
Ricky spent three years trying to get the License for ‘Ashokan Farewell’ (the piece that the Silver Winds & Silver Pipes will perform at Flute Choir Day!).

It was the theme song from the Civil War miniseries. “I wrote to the composer, Jay Ungar, and asked to obtain the license for a flute choir arrangement. At the time during a phone conversation, I mentioned to him that I was a middle school band director in the Princeton Regional Schools. When he heard that, communication stopped for some reason. A couple of years went by, and someone else from Colorado asked me about the same song. They said, ‘you know what, it’d be nice if someone did an arrangement of the ‘Ashokan Farewell’ for flute choir’. I said, ‘I agree. I’ve tried to get the license for that particular song, and they would not give it to me.’” Ricky gave his friend the contact info for the composer, told her to write to him and request permission for Ricky to do an arrangement. “Don’t you know I got a call from Jay Ungar after that asking if I was still interested.”
“Sometimes you need a little help and the original artist needs a push.”
“You just never know. Every case is different.”
Ricky has written compositions for many different instruments over the years.

Intimidating Ricky fact:
“When I hear works in my head, my mind hears them played well.”

We talked a little about things in his music that can be good or bad. Dynamics and tempos can be flexible much of the time, but within reason. ‘Waltz Italiano’, for example, would sound terrible slow but might be better and more fun a little faster than recommended. He tells me, “If you’re comfortable with it, adjust the dynamics and/or tempo, it’s flexible.”
Writer’s block has long been my nemesis, as it is for many people who enjoy writing. Consequently, I wondered if that happened for composers as well.
“Absolutely.”
My next question being, “how do you power through that?”
The answer was not discouraging, but comforting, knowing someone like the great Ricky Lombardo can get writer’s block. “Sometimes you don’t, it just takes time,” he tells me. “Maybe it’s different for everybody, but I’ve had writer’s block for longer periods of time than I would like. It does happen! What are you going to do? Sometimes it happens.”
“When that occurs, do you just stop, and do something new?”
“Or you just stop altogether, put down the pencil and do something different. Maybe come back to it later? Other times you can just start writing with it going really fast and easy.
“Do you know, what I’ve found, believe it or not? Sometimes, the pressure to meet a dead line makes things go faster and better.”
“Do you have any advice for aspiring composers?”
“Yes, I would say there are two important things. First, listen to lots of music in the medium you want to write. Secondly, probably more important, is to be able to listen and hear the arrangements you have written. Then, you will know what works and what doesn’t.”

Interesting Ricky fact:
Ricky hand-writes every piece before he puts it in Finale (the music-writing software). He will be bringing the originals for almost all of the pieces he will be working on with the RAFA choirs.

RAFA came up multiple times, and we talked about the community and how the organization promotes flute playing. He told me, “Oh! I think it’s a great organization. My friend Mimi Stillman, who was a previous guest artist, told me it was fabulous.” There is no organization like RAFA in Ricky’s hometown. I asked him if he was excited to come visit. “Yes, it should be fun,” and mentions how he is excited to work with us on his music. “You have a really active flute association there, which I think is very nice.” He told me that if he were in Raleigh, he’d be a part of RAFA.
“I think when you’re a member of an organization like that, it’s a lot more than just playing the music. It almost becomes your family and there is a lot of social interaction. The members really look forward to it.”
“I think out of the flute organizations that I’m familiar with, yours is probably one of the biggest.”

Ricky is clearly a revolutionary in the flute world. He arranges for many kinds of instruments in all sorts of groupings. Ricky, of course studied classical flute, but you can tell after playing just one song, like ‘Traffic Jam,’ that his inspiration is not all Bach, Mozart, and Beethoven. He draws a lot of inspiration from jazz and commercial endeavors. He mentions his harmonies. “For years, people would come up to me and question a note in one of the arrangements. They will say ‘Oh, that’s a Ricky note,’ because it’s not what you’re used to hearing, but when you listen to the total picture, it sounds really nice.”

When he talks about it, it sounds like his favorite thing to throw into a piece. “The ‘Ricky notes’ need to be played in tune because they are often close harmonically and essential to the structure of the chord. A major seventh in the harmony sounds really good if it’s in the right voice.” They are just notes on paper until the musician makes it music.

0 comments on “A Chat with Ricky Lombardo”